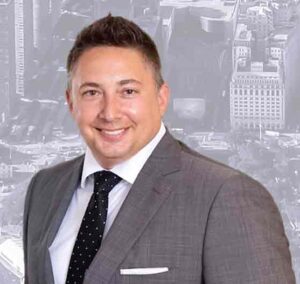 Justin A. Calabrese regularly provides counseling to healthcare, automobile, property, fidelity and life insurers on claims handling practices and investigation techniques, and works with his clients to develop fraud prevention, detection and recovery plans.  Voted one of 2015’s Top 40 Under 40 by Long Island Business News for leadership in business and local community organizations, Mr. Calabrese recovered and saved millions of dollars for his clients.

Mr. Calabrese’s practice includes the defense of commercial litigation claims, suspect/fraudulent insurance claims, general liability claims and insurance coverage disputes.  In addition, Mr. Calabrese regularly conducts examinations under oath of medical providers and insureds and specializes in commencing and litigating state and federal court actions against medical practitioners, medical entities and insureds (among others) suspected to have engaged in complex healthcare and other fraud schemes.

Prior to joining the Hollander Legal Group, Justin was a partner at a large regional firm where he commenced and prosecuted more than 20 complex litigation matters in federal court asserting violations of the Racketeer Influenced and Corrupt Organizations Act and claims for fraud and unjust enrichment, seeking to recover payments made by insurers to physicians, medical clinics, attorneys, public adjusters and others involved in systemic fraud schemes.  Additionally, Justin successfully obtained dismissals of bad faith claims asserted against his clients including:

Justin was admitted to practice in the State of New York in 2004, and is admitted to practice in the United States District Courts for the Eastern and Western Districts of New York.  He is a member of the New York State Bar Association, the Croatian-American Bar Association, the Association of Croatian-American Professionals and is Vice President of the Islands Medical Assistance Society which provides funding for medical and other services to those in need.