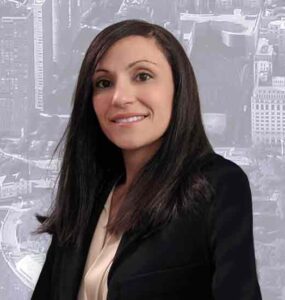 Nadia has joined Hollander Legal Group as an of counsel attorney in 2019 where she continues to focus her career on general liability matters and no-fault law.

Nadia is admitted to practice in the New York State Courts as well as the United States District Courts, for the Eastern and Southern Districts of New York. Nadia earned her law degree from Touro Law Center in 2006, where she achieved Dean’s List and was Vice President of the Columbian Lawyer’s Association. She graduated Magna Cum Laude from St. John’s University, with a Bachelor of Science Degree in Psychology in 2002, where she also achieved Dean’s List in all semesters and was a member of the Phi Eta Sigma National Honor Society as well as the Psy Chi National Honor Society in Psychology.